Do any of you ever feel this way?  It isn’t that I don’t have some really fabulous days.  I do.  But it seems that I have more frustrating days than not.

Some things that just seem totally unfair to me:

IF DISHES ARE LEFT IN THE SINK AT NIGHT, THEY ARE STILL THERE WHEN I WAKE UP IN THE MORNING.  I find this very upsetting, so I try NEVER to leave dishes in the sink.  But sometimes someone comes in behind me after I’ve gone to bed, and in the morning there they are, still in residence.  Has anyone tried going to the sheriff’s office to have dirty dishes served with an eviction notice?

My biggest peeve right now.  I worked and babied a vegetable garden all year, and now it’s harvest time!  I had gorgeous winter squash and heavily laden pepper, tomato, and basil plants!  Man, was I ever walking proud.  And then Mother Nature decided to send us two overnight freezes.  My poor plants are frost bitten and pathetic. 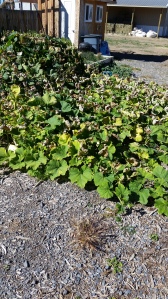 Isn’t that about the saddest squash patch you’ve ever seen?  Why couldn’t Mother Nature wait another two weeks?  I think I’ll file a complaint.  If you have her address, would you send it to me?

Then, the thing that really, REALLY gripes me is looking in a mirror.  Is that woman I see actually me?  Unfortunately, yes!  If you have moments when you see your reflection and simply cannot believe it is you, would you please post a few comforting words to me.  And, please, don’t tell me that beauty resides within us.  Someone would need an excavator to dig deep enough to find my inner beauty.

And, no, I’m not posting a pic.  I haven’t done my hair or makeup.  I don’t want to scare anyone to death.

And last but not least, there is a huge problem with Sundays.  When it is Sunday, it means that tomorrow is Monday.  And most of you know what that means, back to work.  I work most days of the week, so I don’t know why a waning Sunday afternoon is slightly depressing to me.  Tomorrow won’t be much different for me than today.  Maybe I have sympathy depression for all of you who look forward to Friday because it means you’ll have the whole weekend off.

Hugs!  I hope you have a wonderful week.  I’d send wishes that it will speed by and be Friday before you can blink, but my mother always warned me not to wish my life away.  So I won’t wish yours away, either.

First, my apologies for starting this blog and then abandoning it for ten months.  My husband and the love of my life passed away after a very long battle with Pulmonary Fibrosis on November 13th, 2014.  After that, I lived in a daze for a while, and when I snapped out of it, I had a book to write.  Needless to say, my blog lay in cyberspace, forgotten for many months.

But now I’m back to blather at you!

I always get excited when one of my books is about to be released.  I can barely wait to get feedback from readers.  Writing a book is very like being pregnant with a baby.  You spend months creating it, and then when it is finally born, you hope everyone will think it’s wonderful.

I’m particularly excited about the release of my next book, NEW LEAF!!  I had just finished the book and received my first round of revisions, which were minimal, when my long-time editor, Ellen Edwards, called to drop a bomb on me.  Penguin Random House had merged with Berkeley, and during the merge, people from both houses were being let go.  Ellen was one of them.  I loved working with Ellen, and over the years, we’d grown comfortable with each other.  We had also become great friends.  In my professional life, Ellen had become one of my anchors.  I had recently lost my beloved husband as well, so I was on emotionally rocky ground.  Losing Ellen was devastating to me.

Every writer will probably tell you that the very worst time to lose your editor is during the production of a book.  Often, along comes a new editor who has never seen “your baby,” didn’t read the original proposal for “your baby,” and could very well think, “Well, this is just about the dumbest book I’ve ever read.”  I’m not and never have been an editor, but judging by my experience in publishing, editors are much more than mere word jockeys who correct sentences and punctuation.  Much like a writer, they put a piece of their hearts into a story, they become emotionally bonded with the story, and their feelings toward it deepen from the conception of the plot idea to its completion.  Ellen had been onboard as I wrote NEW LEAF, and she’d even been involved as the title was chosen and the cover designed.  A new editor would enter into the picture cold, with no attachment to the story, the title, or the cover. 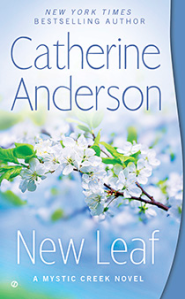 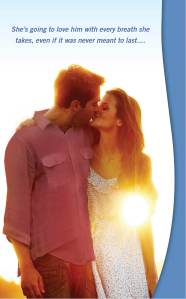 Ellen loves NEW LEAF, but what if my new editor detested it?  This was a very real and justifiable concern.  I felt like an orphaned child who might never find another loving parent.

Well, the people in charge at my publishing house went out of their way to find an editor for me.  Even Ellen, who felt sad about leaving, told me that Kerry Donovan was a fabulous editor and that I would probably enjoy working with her.  Well, I’m a veteran writer, so I knew that I had to roll with the career punches, so, tongue in cheek, I went to work on the light revisions of the book that Ellen had suggested.  I was not at ease during this process.  I kept thinking, “You aren’t making these changes for Ellen.  You’re making them for an editor who has never even read this story.”  That is not a good way to feel as you write.  But I did the revisions and sent the book off to Kerry.  We’d “met” over the phone, and as Ellen predicted, I really liked Kerry as a person, but would I be fond of her as an editor?

When Kerry got back to me about NEW LEAF, I expected her to suggest heaps of revisions.  Instead she absolutely loves NEW LEAF.  She had nothing but awesome things to say about it, and her line edit of the revised book was very light.

Having had two editors rave about how wonderful NEW LEAF is has filled me with confidence about the story and made me feel very eager for its release when my fans will finally get to read it.  It is my hope that a huge percentage of you will love the book as much as my two editors do!

In the meanwhile, as I await the release of the book, I’m turning over a new leaf by starting anew with Kerry Donovan as my editor.  So far, she is everything I could ask for in an editor.  I’m learning a lot from her and the publishing house about online presence.  I’m totally enjoying chatting with all of my new and old friends on Facebook.  I’m presently plotting the next book in the Mystic Creek series.  I cannot say too much about that until the proposal has been accepted, but I can assure you that you will return to the quaint town of Mystic Creek, get to read about people you’ve met and grown to love in SILVER THAW and in NEW LEAF, and that you’ll meet new and interesting characters as well.

If you aren’t already a regular on my new Facebook page, I hope you’ll hop over to say hello.  You may decide that it’s so much fun there that you’ll decide to “Like” the page and visit often!  You can find me and lots of new friends at https://www.facebook.com/catherineandersonbooks

Until next time, big hugs to all of you,