Well, I’m locked out of Facebook.  I never intentionally did anything wrong, and I’m very hopeful that my access to my community page will soon be restored.  That said, Facebook is slow sometimes to get around to doing stuff, so—I wait.  I miss all my friends online so very much!!  I can’t help but be afraid that they will not forgive my unintentional transgressions and will never allow me to access my page again.

Their message to me indicated that, (A) it appeared that I had multiple pages or (B) that I had multiple identities.  I had to send them a photograph of my driver’s license and, for good measure, I sent a photograph of my passport.  It felt kind of like being in security at the airport, so why not?  I needed to prove my identity to them, so I sent double proof.  I was so upset about losing access to my Facebook page that I would have happily volunteered for a body X-ray.  After all, it wouldn’t be my camera that got broken.

What happened?  Well, I merged my old Catherine Anderson Author page and a linked business page with a new page, a Catherine Anderson Community Page.  When Facebook first did the merge, I was unable to access the new page, so Facebook postponed deleting my old Catherine Anderson Author page.  (Is it sounding confusing to you yet?  Well, it was to me.)  I was advised by social media experts to leave the old page up for a while, unfriend everyone on the old page, and not use it.  Then, when I determined that it would be smooth sailing with the new page, I should delete the old page.  During this two-page period, I was told to use a slightly different name to clarify for people on Facebook which page was which.  So I added my maiden name to my profile name, making it Catherine La May-Anderson.

So when I signed in to the old page, with every intention of deleting it, I discovered, much to my dismay, that during the merge, I had been removed from the page as an administrator.  Being the technically impaired individual that I am, I had no idea how to reinstate myself as an administrator.  This left me without the authority to delete the page or deactivate it.  Simple solution: Hire a social media expert to fix everything.  Right?  Well, that was an obvious alternative, even to me, challenged as I am by technology.  But I had just paid social media experts for work they’d already done for me during the merge, and I’d just paid a significant amount of money to the designer who had created a new website for me.  I could not comfortably afford to hire a social media expert to get rid of the old page.  Then there was an additional wrinkle.  On the old page, I had a private group.  During the merge of pages, that private group was duplicated for the new page, only somehow several members of the old group didn’t get transferred to the new group.  (I know this sounds like a mucked up mess.  That is because it is a mucked up mess.)  So I also needed to get all the abandoned members moved into the new group.

Well, I happen to know a lady on Facebook who is a whiz at this kind of stuff, and I believed she would help me out for a reasonable fee, so I began trying to get in touch with her.  I finally did connect with her about three days before Facebook shut me down.  She not only said that she would help me out for free, but she immediately began trying to get all the left-behind members in the old private group moved over to the new private group, and I was working on that as well.  I went to the new private group and made a list, by hand, of all the members there.  Then I went back to the old group and compared the list to the membership there.  Anyone not on the list needed to be invited to join the new group.  In order to invite them, I needed their email addresses.  So I was in the old group, posting away, asking each of these people for their Facebook sign-in email address.

Well, this is only my best guess, but I believe Facebook algorithms picked up on all the posting that took place in the old group and then noted that Catherine La May-Anderson was posting to a group on the Catherine Anderson Author page.  This looked like suspicious activity.  For one, Facebook doesn’t not allow people to have multiple identities on Facebook, and Catherine Anderson aka Catherine La May-Anderson was a red flag.  Plus, I clearly had two pages, and that isn’t allowed, either.

So my goose was cooked.  Or, given the imminent arrival of Thanksgiving, maybe I should say my turkey was cooked.  In a blink, I was locked out of Facebook.  If this has ever happened to you, you know how frustrating it is.  It is also emotionally traumatizing.  I have so many dear friends in my Facebook community.  Were they posting and wondering where I’d gone?  Or would they even post at all?  Did they think I’d just dumped them?  Not even my personal assistant could go in and tell my Facebook friends what had happened because her page had also been locked down.  I think Facebook suspected that Julia Ashton was another of my fraudulent identities.  I have been so upset!  Facebook sent me a support link where I can check on the status of my case.  Using superhuman restraint, I only check my case status about every thirty minutes.

A social media rep at my publisher has been in touch with the Facebook person who assisted with the merge of my pages, and I am hopeful–note that I stress the word hopeful–that I will be granted my Facebook privileges again soon.  But there is also a chance that my transgressions may not be forgiven.  When I think of that possibility, I get heart palpitations.

So I’m waiting, and waiting, and waiting for a verdict.  I hope all of you will keep your fingers crossed for me.  I do not blame Facebook at all for this.  It is Facebook’s obligation to protect Facebook users from fraud, and fraudulent businesses apparently operate with multiple pages and multiple identities.  So, in a way, it is comforting to know that Facebook is so vigilant in protecting all of us.  It’s GREAT–until you are one of the users who gets shut out.

Anyway, I hope all of you will consider keeping in touch with me here on my blog.  I believe you can comment, and I miss you dreadfully!

I did have some nice news today.  I was sent a wonderful Romantic Times Review of my upcoming release, NEW LEAF, due to be out on January 5th. 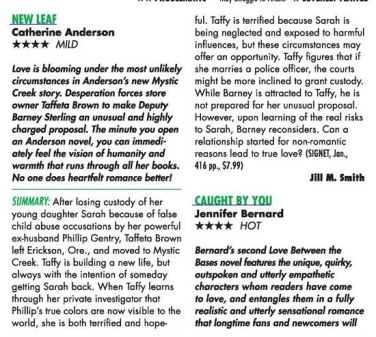 Nice, huh?  Well, it brightened my day, anyway.  Hugs to all of you, and hopefully my next post will be about something far more uplifting.